Re: City of Jacksonville for Purchase Order PO108044

An artificial reef was created using over 700 tons of clean recycled concrete material off the Coast of Jacksonville Florida on July 28th, 2011.  The reef material was placed within the Floyds Folly permitted boundaries (Permit SAJ-2007-261) at an average depth of 73 feet.

Reef material was found dispersed in a random and sporadic fashion with both densely clustered congregations as well as isolated pieces.  Several fish species were observed as well as a few mobile invertebrates.  The reef was placed well within the permitted boundaries and the maximum vertical relief from the seafloor was below 50 feet from the surface.  The reef deployment appears to meet regulatory requirements and should evolve into productive marine habitat.

The goals of the post deployment survey included mapping the overall material layout and making note of the material orientation.  Obviously the reef site would have to be located, but to better aid in mapping efforts, a center location of the scattered material would need to be identified.  A central location would provide an ideal benchmark serving as a fixed location in which survey observations could be referenced to.

Joe Kistel provided Captain Steve Park the coordinates he (Kistel) recorded during the actual reef deployment.  Using the GPS aboard the Native Diver II, as well as a handheld unit, Captain Park navigated the boat to the reef site.  Once nearby the coordinate location, sonar equipment was used to look for structure on the sea floor.  The reef was found very near the coordinates provided but a central point was yet to be identified.  To find the center Kistel instructed Park to find the extreme East-West boundaries of the sea floor structure using the sonar/GPS.  During the deployment, the barge was initially placed in an East West direction and it was thought the reef material would be placed in a 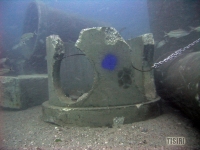 corresponding East-West linear pattern. Park noted the East-West boundaries with the GPS and the boat was anchored roughly half way between those two points.  The boat anchor was manually attached to a short culvert structure and this unit was to serve as the reef benchmark (see figure 1). 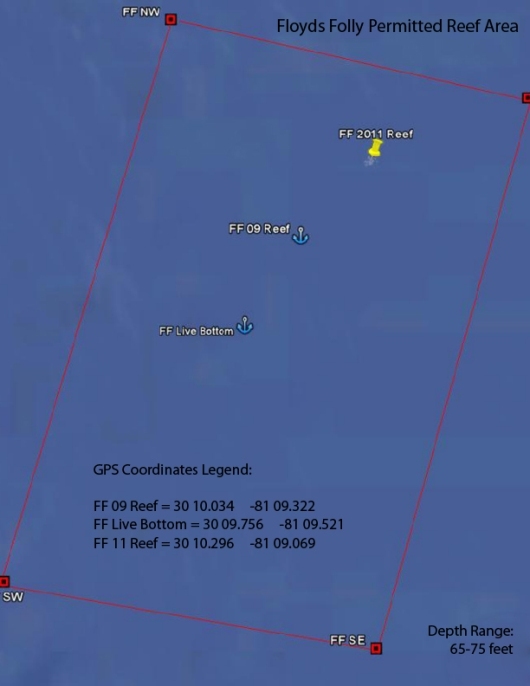 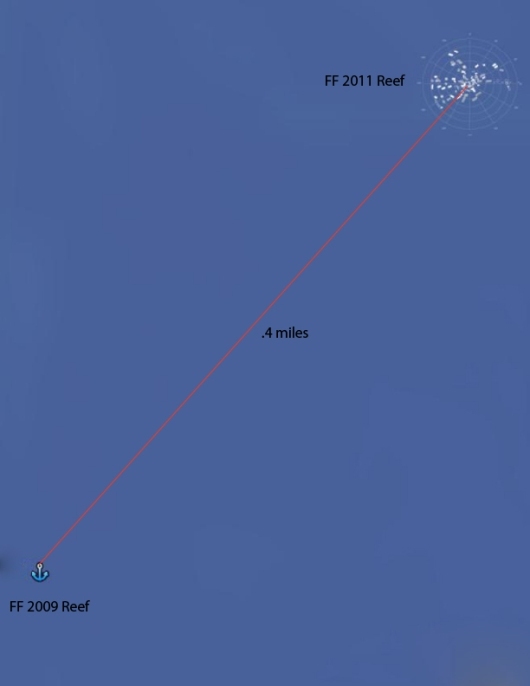 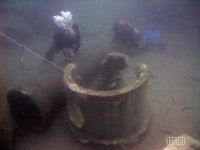 The Native Diver II was anchored directly to the benchmark allowing the divers the convenience of not having to search for it repeatedly. This benchmark is defined as a fixed reef structure in which all measurements and observations are made in reference to.

Scuba diving surveys of the reef were conducted to collect map and observational data.  Dive teams attached measuring reels to the benchmark (Figure 4) and swam a series of compass radial headings out to a 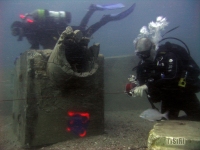 distance of 150 feet.  An overall circular area of roughly 70,650ft2 was investigated. Divers noted material pieces and structural layout by drawing rough sketches on slates of what they encountered in reference to the radial line they were swimming.   Divers also recorded the height of various structures and the marine life they encountered.

Figures 4 and 5 below show a scatter map and the overall footprint of the reef material based on divers observations.  The maps were generated as accurate as possible but these maps should not be relied upon for underwater diving navigational purposes.  The shapes shown on the map represent the various types of materials encountered and the relative position they may have been found.  Surely not every piece of reef material deployed is shown on these maps but the illustrations allow a general idea of the material layout and observed reef boundaries. 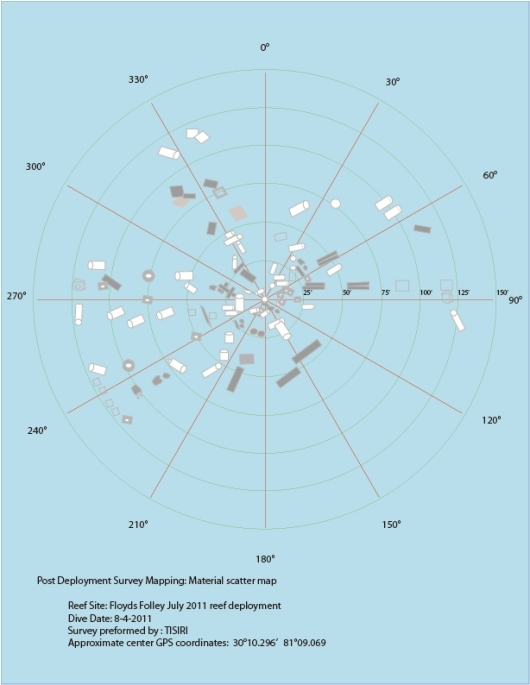 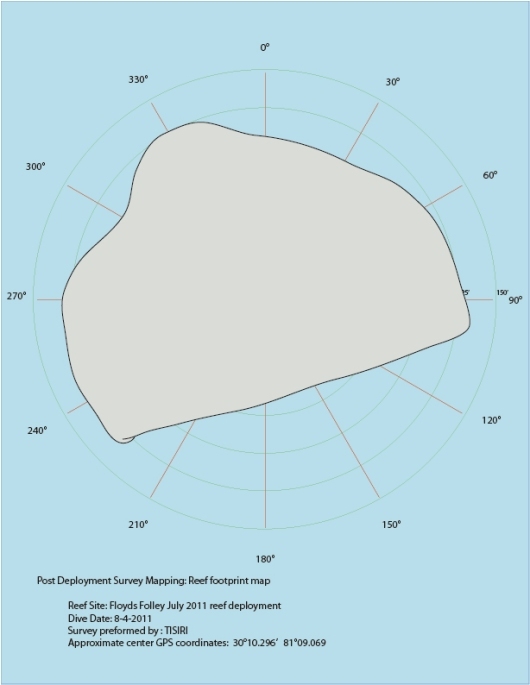 The chosen benchmark appears to have been a good approximate central location.  All the material observed was found within 125 feet from the benchmark.  The trend was structures were found clustered and sporadically dispersed within the 125 feet radius of the reef benchmark.  The exception was the southward/southwest direction where material was not found outside of 75 feet of the benchmark.

During the deployment the barge utilized one stern anchor.   The barge seemed to have slightly drifted in a northward direction throughout the unload process.  Furthermore, the bow of the barge was free to weathervane.  The barge was primarily positioned in an east-west orientation but the bow occasionally pushed north presumably from shifting winds.  These factors may explain the random material orientation.

Divers reported encountering a variety of concrete structures including:

Material was found clustered in piles, lying flat and occasionally positioned vertically.  Most of the structures appeared intact but some pieces had been broken during the deployment.  These broken structures provided interesting configurations for the pieces that lay on top of them.  Several culverts were found with smaller culvert pipes in them just as they were loaded on the barge.

The most interesting structure observed by the divers was a long narrow slab piece of concrete that was found in an upright position about 50 feet East-South-East of the benchmark (Figure 7).  This was the highest observed point of the overall reef, standing over 10 feet tall.  One diver claimed the structure reminded him of the movie “2001 Space Odyssey.” 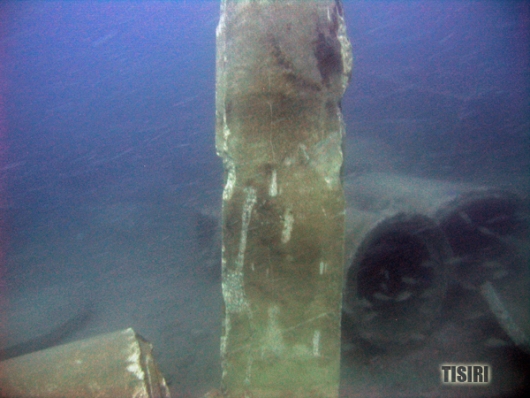 Other structures throughout the site ranged in heights from 1 to 8 feet off the seafloor.   The extreme high pieces were the few large culvert pieces that happened to land upright.  Most of the material pieces were orientated lying on their longest side creating an overall average reef relief under 4 feet.

Even though this reef material was placed only a week prior to these survey efforts divers encountered a variety of marine life.  Animals spotted included:

Based on the results of the survey efforts, it appears the new reef located at 30° 10.296’ N, 81° 09.069’ W has been created adequately.  The area should evolve into thriving marine habitat and provide an additional resource to be utilized by the local community.