What a great day it was to be on the water. The Atlantic was glass calm and the air was clear as far as our eyes could see!

Today’s mission was to visit the concrete artificial reef material placed off Jacksonville this past summer. The area is known as Floyds Folly and 700 tons of concrete was deposited here in August of 2009. This Jacksonville Reef is only ten months old and this was my (Joe Kistel) first visit to the artificial reef site since its deployment.

The cruise to the FF reef area was surreal. The ocean was flat calm and we could see every moving critter that broke the surface. Baitfish was abundant, accompanied by schooling Bonita and Mackerel. We saw an uncountable amount of Sea Turtles, many of them being large leatherbacks that are perceived to be rare. We saw large rays with cobia and remora companions, as well as porpoise and sharks. The ride out to the artificial reef site was a great start to our trip.

Onsite, we met up with our partnering vessel and anchored over the reef. The sea water appeared clean and clear and several turtles breached while we were preparing to dive. The goal for the first dive was to place the reef site bench mark. A bench mark is a fixed location on an artificial reef that used as a reference location. Mapping and surveys are conducting using this as a fixed point.

Myself and John Perkner geared up and jumped in the water. Immediately, two cobia swam up to us. They did not appear shy at all.

As we descended, carrying the tools and bench mark material, the clear water became murky. At the sea floor the visibility was 15 feet at best. Our anchor, what we descended on, was just off the reef material in the sand. As we swam to the reef structure all we could see was a wall of baitfish. There as so much baitfish (minnows, shiners, etc) that we could not see the reef structure the fish were swimming around. It was a bittersweet moment for us. Although it was great to see such an abundance of life over the “new” artificial reef, we were having a hard time observing the structure of the reef itself. Regardless, we had a mission to complete and we felt our way to what we thought to be the center of the reef. Here there was a small sandy area where we hammered the stainless steel bench mark into the ground. Once completed, we did our best to survey the reef material and take some pictures. The baitfish never thinned out and their density made the visibility practically nil.

On our second dive we focused on video and pictures. The visibility dropped to about ten feet on this dive and, when surrounded by the schooling baitfish, it was just dark. This made pictures and video very difficult and if you look at the attached media you will get a good idea of what it was like.

Regardless of the lower then desired visibility, both dives were great! At 10 months this is already a thriving reef. The concrete structures were covered with various forms of growth. Barnacles, tunicates, and algae were the most common encrusting organisms. Crawling starfish and sea urchins were on just about every square foot of reef material. I assume the fresh algae growth on the concrete structure brings these guys in to graze. There were so many urchins that I was pricked several times just by bumping into structure. Starfish were just as plentiful. In fact, at one point I was kneeling on the sea floor for a few seconds and when I swam off I felt something on my leg. Turns out a starfish had already crawled up my leg!

Other critters observed, to name a few, were: sea bass, tomtates, flounder, a green sea turtle, remoras, and a goliath grouper.

This Jacksonville reef site is another great example of the benefits of artificial reefs. Again only 10 months old and thriving!
Reef map sketch below. 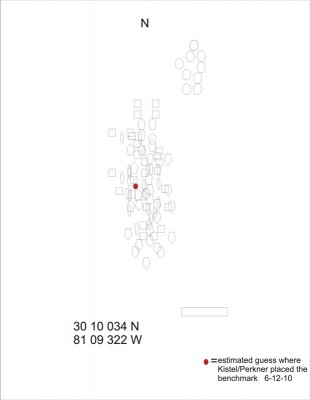