An artificial reef was created using over 700 tons of clean recycled concrete material off the Coast of Jacksonville Florida on August 2nd, 2013. The reef material was placed within the Floyds Folly permitted boundaries (Permit SAJ-2007-261) at an average depth of 73 feet.

TISIRI located, surveyed, and mapped the reef material on 8-2-13 (less than one hour after the reef deployment). Divers that participated made general observations and swam prescribed radial headings sketching material layout along their path.

The goals of the post deployment survey included mapping the overall material layout and making note of the material orientation. Obviously the reef site would have to be located, but to better aid in mapping efforts, a center location of the scattered material would need to be identified. A central location would provide an ideal benchmark serving as a fixed location in which survey observations could be referenced to.

This was thought out prior to the deployment and was achieved through planning. A pre-made mooring line and bouy was prepared and stowed on the deployment tugboat prior to departure from the shipyard. The barge was anchored throughout the entire deployment process and thus it was assumed that the center of the barge would sit atop the central point of the reef below. As the contracting crew was near the end of deploying material, the mooring line was secured to a piece of concrete that was placed off the side of the barge (near the barge’s center point). The concrete and attached line sank to the sea floor leaving the floating buoy at the surface. This created a mooring location for our dive boats to attach and a decent line leading divers to the benchmark location. The benchmark was an area chosen as a reference point in which all measurements and navigational headings would be based from. Figure one shows the general benchmark location and in the image you can see the mooring line leading to the dive boat above.

The GPS numbers recorded here were as follows 30°10.361’ N 81°09.429’ W. Figures 2 and 3 below show this position in reference to the entire Floyds Folly permitted area and the nearby reefs. 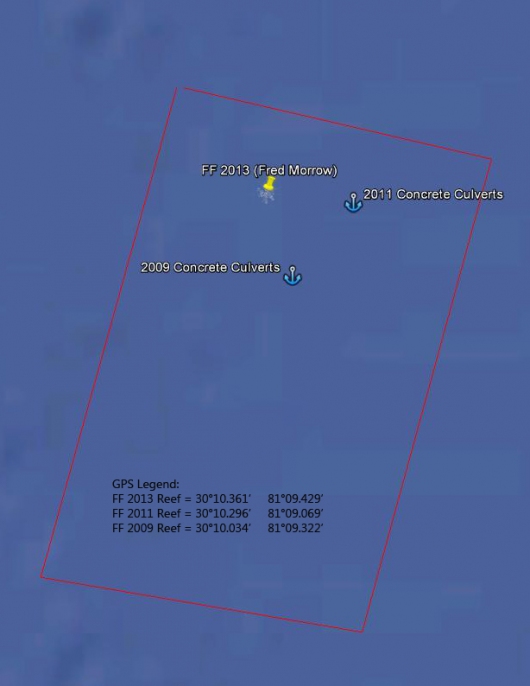 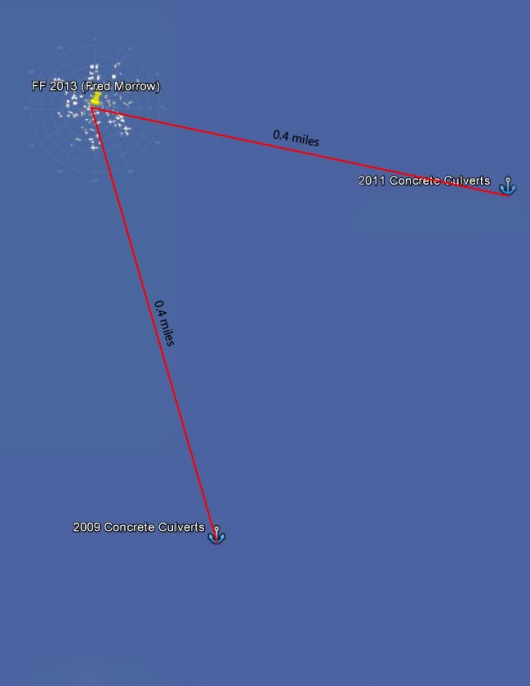 The Diamond Diver (primary diver vessel) attached directly to the mooring line mentioned previously. This allowed the divers the convenience of descending directly to the benchmark. This benchmark is defined as a fixed reef point location in which all measurements and observations are made in reference to.

Scuba diving surveys of the reef were conducted to collect map and observational data. Dive teams attached measuring reels to the benchmark and swam a series of compass radial headings out to a distance of 150 feet (Figure 4). An overall circular area of roughly 70,650ft2 was investigated. Divers noted material pieces and structural layout by drawing rough sketches on slates of what they encountered in reference to the radial line they were swimming. Divers also recorded the height of various structures and the marine life they encountered.

Figures 5 and 6 below show a scatter map and the overall footprint of the reef material based on divers observations. The maps were generated as accurate as possible but these maps should not be relied upon for underwater diving navigational purposes. The shapes shown on the map represent the various types of materials encountered and the relative position they may have been found. Surely not every piece of reef material deployed is shown on these maps but the illustrations allow a general idea of the material layout and observed reef boundaries. 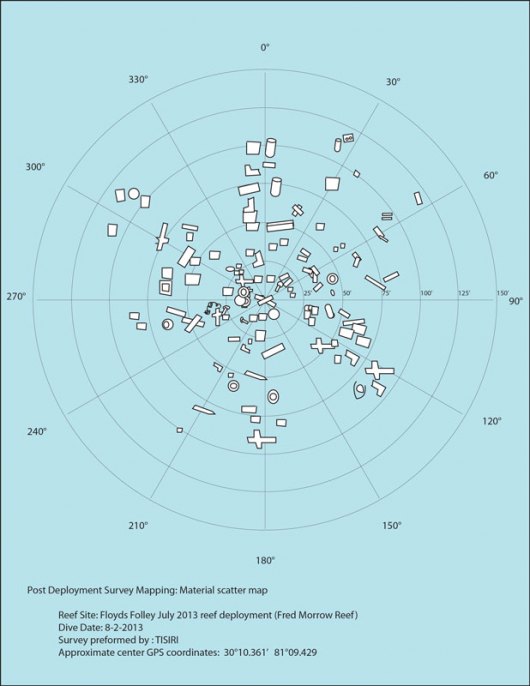 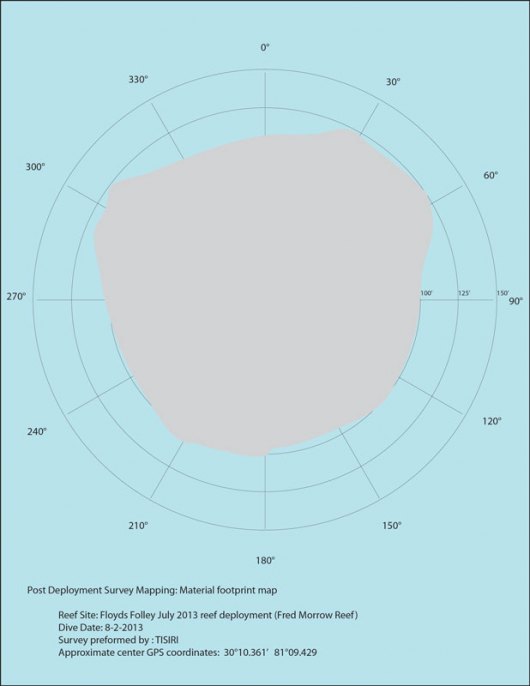 The chosen benchmark appears to have been a good approximate central location. All the material observed was found within 125 feet from the benchmark. Structures were found clustered and sporadically dispersed within the 125 feet radius of the reef benchmark. In fact, the footprint generated from the material layout creates a somewhat circular shape with a diameter of nearly 250 feet.

During the deployment the barge utilized two anchors cabled to the mid section cleats of the barge. The barge seemed to have stayed in a fix location but was allowed to pivot around its center point throughout the unload process. This is most likely why the material is dispersed as it is. The rotating barge created a circular pattern.

Material was found clustered in piles, lying flat, and occasionally positioned vertically. Most of the structures appeared intact but some pieces had been broken during the deployment. These broken structures provided interesting configurations and should add to the diversity of habitat. Some culverts were found with smaller concrete pieces in them just as they were loaded on the barge.

The most interesting structure observed by the divers was a long narrow footer piece of concrete that was found in a stacked angled position near the benchmark (Figure 7). This was the highest observed point of the overall reef, standing nearly 10 feet tall. The profile created by structure is quite a site.

Other structures throughout the site ranged in heights from 1 to 8 feet off the seafloor. The extreme high pieces were the few large culvert pieces that happened to land upright. Most of the material pieces were orientated lying on their longest side creating an overall average reef relief under 4 feet. 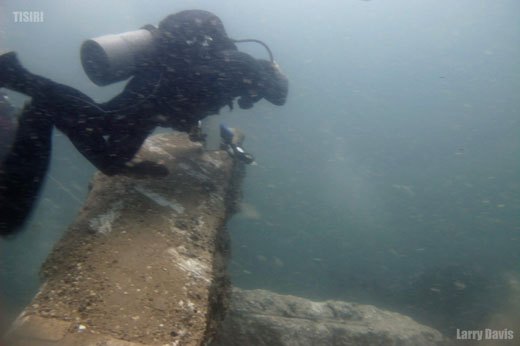 Another video of the deployment day events (edited by Larry Davis) can be found here.

Based on the results of the survey efforts, it appears the new reef located at 30° 10.361’ N, 81° 09.429’ W has been created adequately. The area should evolve into thriving marine habitat and provide an additional resource to be utilized by the local community.